07 Aug The Story of Scott

Posted at 16:43h in Health, Rehoming, Training by Morag 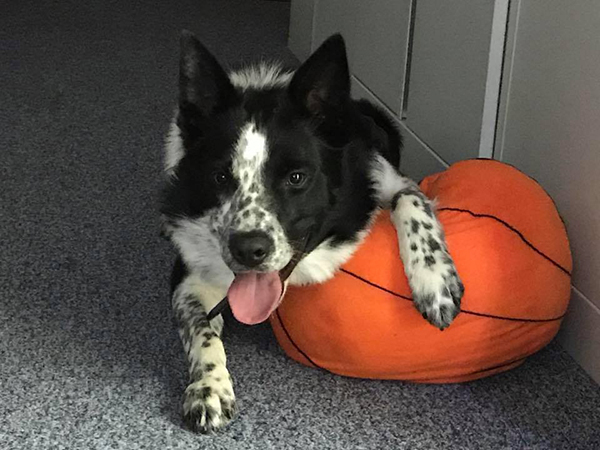 I first met Scott after his lovely vets suggested to his human guardian that she talk to me about his behaviour.

Poor Scott came to his new family from a farm, and brought with him a great many gut parasites, not just the all too common roundworms that most puppies will have.  This meant that his vets had to prescribe a barrage of treatments to get rid of them, as well as his poor guardian having not only to give him lots of medicine, but also to keep him at home until he was clear of the parasites (for the safety of other dogs sharing the environment). She was also washing his backside after every poo to reduce the risk of him reinfecting himself.

All in all, not the ideal way to establish a good relationship with your new puppy !

As my existing clients will know, I am quite obsessed with our dogs’ guts and all things nutrition, so my mind immediately went to “how can we repair Scott’s guts”.

We know that the gut is very closely involved with how we feel (think of the expression “gut feeling” – how often is our gut feeling right, but over ruled by our heads?) and poor Scott’s guts had taken a real hammering firstly by the parasites and secondly by the treatment to get rid of the parasites !!

His lovely human was keen to try, and, even better, so was his brilliant, open minded vet, so we made lots of changes to put him onto a very natural diet to help the normal “good” bacteria which should be in his guts to establish themselves in the right proportions.  How exciting when he started to have normal, firm poos that were easy to pick up !

Sadly for both Scott and his human family, they were living in a rented house with somewhat challenging neighbours who made noises against the fence whenever Scott was in the garden, so he was too frightened to go to toilet there, and had to be taken out for toilet walks, even though he was frightened of passing cars, people, other dogs, children on scooters etc,  This meant that Scott was continuously stressed, and unable to rest and settle even in his own home, a dreadful situation for everyone.

Scott’s guardian was very well aware that he had missed out on good social learning because of his parasites, and tried really hard to make up for this by taking him to a class.  Unfortunately, the class wasn’t run by up to date people, and this caused him yet more fear (there were too many dogs in a hall and they were all stressed in the environment).

The next plan was for him to go to day care from time to time, where he could mix with other dogs. Again, sadly the people here didn’t recognise how frightened Scott was, and he ended up with a bad reputation for not coming back (as he didn’t want to be in the environment with the other dogs).  This is a good example of trying to make a dog “face his fears” and get over them.  It doesn’t.  Imagine being afraid of spiders, and somebody shutting you in a spidery shed – you won’t come out feeling any better about spiders at all !

Luckily, his sensible guardian decided to get help, and asked the vet’s advice, and I have been lucky enough to work with them !

Scott is a very, very bright dog and keen and able to learn, but he just couldn’t take his lessons on board in this environment due to being so stressed.  His wonderful human family decided to move house to help him (and themselves, the neighbours really weren’t great for them, either !).  Every time we made a few steps forward, the environment set Scott back again, in spite of all the support his guardians were giving with excellent diet, calming supplements, TTouch, essential oils and lots of good, positive training.  This was a fabulous family willing to do anything to help their wonderful dog.

He has now been in his new home for just a few weeks, and is already a different dog !  That’s not to say that he is perfect (who is?!) but he is now able to learn and process, because he can rest and relax.

Scott is a sad, but excellent example of a dog, through no fault of his OR his human family’s, who was never going to be able to change his behaviour, because his behaviour was the result of how he felt, and he felt exhausted and frightened, most of the time !

This story serves to emphasise how very important it is for our dogs to be able to relax and feel safe, all that any of us want, really !  This is why Gelert Behaviour Training organises talks and workshops with professionals who are able to teach us how to support our dogs’ well being, and why we talk to clients so much about how their dogs are feeling, whilst we are teaching them.  You cannot change behaviour without changing the emotion that leads to that behaviour !

I’m really looking forward to seeing Scott blossom as he makes up for lost time.  His poor humans are certainly going to be kept on their toes keeping a few steps ahead of this clever boy !

A sad story with a very happy outcome, thank goodness this boy managed to pick such super humans (and a great vet !!)