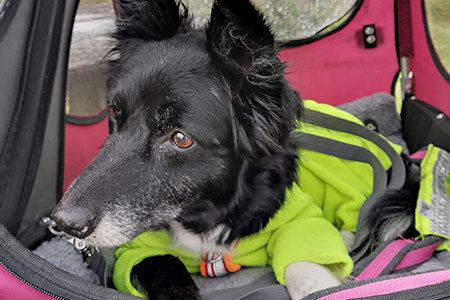 Something really frightening has happened to one of my dogs.

Bearing in mind that I am an RVN, and have seen many dogs affected by what happened, it was still terrifying.  I can’t begin to imagine how scary it would be for someone who didn’t understand.  That’s why I’m sharing this story, I want people to be aware, to know what to do and not to be too frightened to be able to act to help their dog.

One morning, I was woken up very early by a powerful smell of urine.  Once I’d gathered my wits, I searched my bedroom, thinking one of my elderly dogs had been “caught short” overnight.  No obvious sign of wee to be seen.  Also, no sign of Flossy, just two very confused boys on my bed (I am not known for such early rising . . . ).

Flossy was under my bed in a pool of urine, unable to stand and clearly desperately confused and frightened.  I carefully extracted her, and immediately noticed her eyes.  They were flicking from side to side at a frantic pace.  Before I had a plan in place, poor Flossy shot off at speed, trying her best to walk, but only able to “scuttle” like a spider, with her legs out sideways but her belly off the ground (she must have amazing core strength).

I immediately kicked into RVN mode (I’m lucky. I was able to do this and overcome my fright, knowing that Flossy needed me to help her).  I carefully carried her to a low but raised bed with a thick fleece on top of it.  I placed a heavy woollen blanket over her, and secured her to the bed with loose stretchy bandages over her and the blanket (I’ll explain why shortly).  I gave her a dose of a homoeopathic remedy for terror.  It was awful to see my own dog in such a state.

The next thing I did was start a message to my absolutely amazing holistic vet, Michaela, of Just Holistic Vet Care, West Wales.  I described Flossy’s movement, her eyes and her vital signs, her demeanour and the time.  I totally didn’t expect a response so early on a Monday morning, but Michaela rang me almost straight away and we had an acute, emergency consultation there and then.  I can’t thank her enough for her incredible support !

What caused the problem?

Flossy had had a vestibular episode.  It’s something really common in elderly dogs, and I’m pleased to say that it often resolves completely in time. As an RVN who’s worked a lot in emergency clinics, it’s very common for people to call in a total panic believing their dog has had a stroke.  Dogs rarely have strokes in the way that human beings do, but they commonly have sudden serious problems with the balance mechanisms in their ears.  Usually, the first signs are nausea, a head tilt, eyes flicking from side to side, as if reading a newspaper, and moving in a constant circle.  (Flossy clearly didn’t read the instructions properly !!)

What was done to help?

I secured Flossy to a bed because she needed above all to rest, and not to try to move about and possibly injure herself.  The heavy blanket helped her to settle and if I were ever in any doubt that she was feeling very odd indeed, the fact that she accepted this gladly and made no effort to “escape” would have convinced me entirely.  If she had been nauseous, I would have been talking to my vet about medication to reduce nausea as there is nothing worse that constantly feeling sick, but Flossy had no signs of nausea at all.  She was happy to eat her breakfast with some help as she couldn’t coordinate the process properly.  Nauseous dogs usually will drool, and smack or lick their lips, and definitely refuse food.  After lots more questions from Michaela, she gave me a remedy to obtain for Flossy and ordered good nursing care until it arrived the next day.

Flossy was able to indicate when she needed the toilet, and I invented something I wish I’d thought of years ago (it would have saved my back no end in veterinary practice !).  I put her normal harness on, and a second harness on her back end, and joined the two together with a belt.  It meant I could support her comfortably for both of us, and bless her, she went to toilet outside as normal, except for needing support.  It was important to keep her well hydrated which wasn’t easy, as she wouldn’t drink.  I added lots of warm water to her food, and syringed water into her mouth regularly.

What happened with the remedy?

Her remedy arrived the next morning, and she had the first dose straight away.  I watched her like a hawk, ready to report changes to Michaela.  She settled readily and was happy for me to leave her for short periods (I hadn’t been able to, until this point, she wanted me by her).  Another dose was given at bedtime.

On the second morning after her problem, I got up, let the boys out and was absolutely astonished to find Flossy walking out to the garden by herself !  She looked very drunk and wobbly, but was very determined to be independent (which is very normal for her).  This was a spectacular change overnight.

We are now almost two weeks later, and she is a little bit unsteady going around corners, or if she goes too fast.  Other than that, she is back to her normal self, bossing the boys about, playing, running and generally, having a great life.  I can’t tell you what a relief that is.

I do very much believe that Flossy’s excellent health and speedy recovery has much to do with eating a variety of raw foods and being exposed to a minimum of chemicals.  She is 14, and when she met her new vet since we moved, they flatly refused to believe her age !  She definitely is 14, I’ve known her since she was a puppy !

I hope that having read this story, you will keep it in the back of your mind, and should your dog ever have the same experience, be able to remember that there very often IS such a positive outcome, even ‘though things look very, very grim indeed when it first happens.  I hope you never need the information, none the less.

Michaela’s details, along with other recommended colleagues, can be found on this page HERE.